Way too often we hear about a mass shooting and right away the media, politicians and anti-gun lobby go off blaming the so called AR-15 assault rifle.  I sat back and asked myself why the AR-15?  What makes it so special that the perpetrators of these heinous crimes choose it and how many times was the AR-15 actually involved?

What is the AR-15?
To begin with what is the AR-15 in the first place?  The ArmaLite Corporation developed the AR-15 in the late 50’s for the military but later sold the design to Colt, a well-known firearms manufacturer in 1959.  Colt then was successful in selling it to the military under the designation of M-16.  The M-16 was able to fire as a semi-automatic firearm, that is one shot per each pull of the trigger and fully automatic which is it will continue to fire as long as the trigger is pulled or until it runs out of ammo.  With the capability of firing both in semi-automatic and fully automatic is known as “selective fire”.

The designator of “AR” stands for the original manufacturer, ArmaLite, not “assault rifle” as many would have you believe.  The name of “assault rifle” stems back as far as WWII when Adolf Hitler used the term “Sturmgerwehr” which translates to assault rifle for propaganda purposes which became known as the “Sturmgerwehr 44”.

Assault rifles are characterized as rifles that have interchangeable magazines, an effective range of at least 330 yards, have more power than a pistol but less than a standard rifle and have selective fire capabilities.

The firepower of the AR-15 is something in the middle of a pistol and high powered rifle like the .30-06.  For those into numbers, a .223 bullet which is what the AR-15 fires has an average of 509 ft-lb of energy at 300 yards while a .30-06 has an average of 1,106 ft-lb of energy at the same distance.  I am going to stop there for there are way too many dynamics to go into a discussion of ballistics.  Things like barrel length, bullet weight, muzzle velocity, amount of powder in the cartridge, the manufacturer, the wind and more all have an effect on bullet performance.  But it is safe to note that the AR-15 is in the mid-range of fire power.

I did prepare a simple chart comparing the energy of a 9mm and .45 pistol cartridges, the .223, a .308 and .30-06 rifle cartridges at 100 yards using the “Winchester Ammo Ballistics Chart” found on Sportsman Guide (guide.sportsmansguide.com).  You will see that the AR-15 cartridge which is the .223 lies in the middle of power.  It is interesting to note that all 5 of these cartridges were among those used in mass shootings. 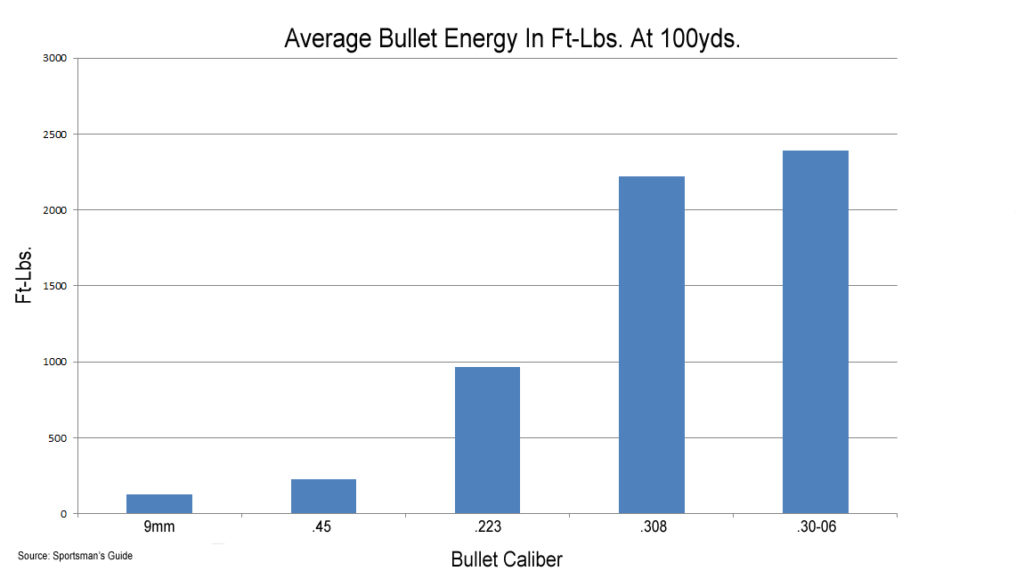 Colt made a semi-automatic version for law enforcement and when the patents ran out, other gun manufacturers started to make their own version of the AR-15 and started selling them to the public.  Sales for the AR-15 took off and it became and still is very profitable.

The AR-15 quickly became the hotrod of firearms due to the ability to customize it with thousands of accessories like scopes, stocks, grips, lights, and much more.  One notable accessory is the infamous bumpstock which was used in the 2017 mass shooting in Las Vegas.  For those that are not familiar with a bumpstock, it replaces the normal stock on the AR-15 and is designed to make your trigger finger pull the trigger faster because of the recoil.  So much faster that it simulates the firing speed of a fully automatic firearm yet the AR-15 remains a semi-automatic rifle.

The AR-15 sports a pistol trigger grip making it more ergonomic, has low recoil or kick back for those that never fired a firearm, and like a lot of firearms is very easy to learn how to shoot.  Prices range from $750 to well over $2,000 for one.  Due to the fact that the patents ran out some people have built their own AR-15 using the various parts that are available online for as little as $450.

And again, like what was pointed out earlier, the AR-15 is a semi-automatic firearm like so many semi-auto’s that are around.

The Research
Digging to try and find out what are the statistics for shootings involving the AR-15 brought about quite a few surprises.

To begin with, there are numerous places that have recorded data on mass shootings and they each set their own criteria for recording and reporting the findings.  No two were alike.  It has been generally accepted among all the sites that were visited that a mass shooting involves 4 or more victims, including the perpetrator, if he or she was shot.

Using the criteria set I went to numerous websites to search for the data that fit the criteria.  One such site visited starting with the FBI Crime Data Explorer (CDE) was beyond useless.  All of the data was encoded with no easy way to decode it.  The database did not drill down to the exact specifics that were needed.

Moving on I went to the “Gun Violence Archive” (gunviolence.org) which has a wealth of information but regrettably they go back only as far as 2014 and they do not have all the data that fit the criteria.  As of December  18, 2018  they show that there have been 1,680 mass shootings since 2014.

They consist of links to various articles about mass shootings produced by the media on web like the following other sites do.  Unfortunately a lot of those articles are incomplete for that do not have the data that is needed for the research.  Things like shooter’s name, or age, or types of weapons, etc.  If a particular article was missing data that fit the criteria, then it was considered as incomplete and not included in the research.

Another site, “Mass Shooting Tracker” (massshootingtracker.org) goes back as far as 2013 and has 2,342 mass shootings recorded as of December 18, 2018.  Like with the previous website if data that was needed to fit the criteria was incomplete, then that case was not included.  It is also interesting to note that in the same time period of 2014 to 2018 the Gun Violence Archive shows 1,680 mass shootings while the Mass Shooting Tracker has 2,003 for the same time period.

I am certain that the cases the previous two websites recorded could change the results if they had the data that fit the criteria.  I would have loved to have included that into my research.  Regrettably they didn’t so I couldn’t include use them.

Next is “Wikipedia” (en.wikipedia.org) where I was able to come up with the needed data.  They had 148 cases of mass shootings from 1949 to 2018 that fit the criteria with the ability to go back to detailed information about each particular incident.

An article by “The Washington Post” (washingtonpost.com) had a lot of information going back to 1966.  They have recorded 158 cases of mass shootings with links to the original media articles.

Finally “Mother Jones” (motherjones.com) had some additional information none of the other sites had and had 107 cases posted.

As you can see there are discrepancies between all of the websites as far as the number of mass shootings are concerned.

The research did bring out four outliers three of which could have been included but since there was certain data missing, were not included in the final results.  But they do deserve mentioning.

One was the Orangeburg massacre on February 8, 1968 where 8 members of the South Carolina Highway Patrol fired upon unarmed protestors killing 3 people and injuring 27 others.  One person who was shot and killed was just sitting on some steps waiting for his mother.  Many of the victims were shot in the back.  The South Carolina Highway Patrol used shotguns, carbines which fall into the high power rifle category and pistols.

Another outlier is the famous Kent State Shootings on May 4, 1970 where 77 members of the Ohio National Guard fired upon unarmed protestors killing 4 and injuring 9.  They used M1 Garand rifles which is considered a high powered rifle, a .45 caliber pistol and a 12 gauge shotgun.

The forth outlier which has been included in the final results and that was the Las Vegas shooting of October 1, 2017 where Steven Paddock brought an arsenal of (22) AR-15 rifles along with a non-semiautomatic rifle and revolver into a hotel room.   He fired them onto a concert from the windows of the room killing 59 and injuring 422.  This is going down as possibly the worst mass shooting in US history.  The only reason this is considered as an outlier was the fact that Paddock brought in so many firearms into his hotel room to commit the atrocity with.

With the exception of the Orangeburg, Kent State and Jackson State mass shootings, there has been no other recorded mass shooting involving so many firearms.

Now where does that leave us? 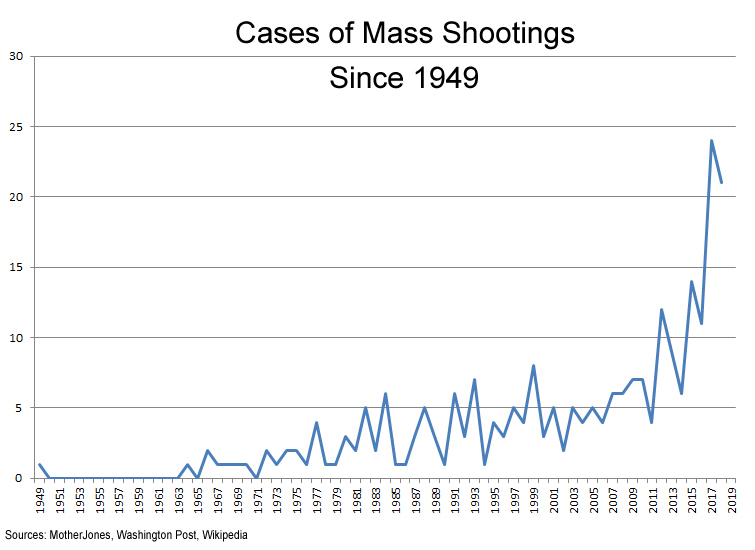 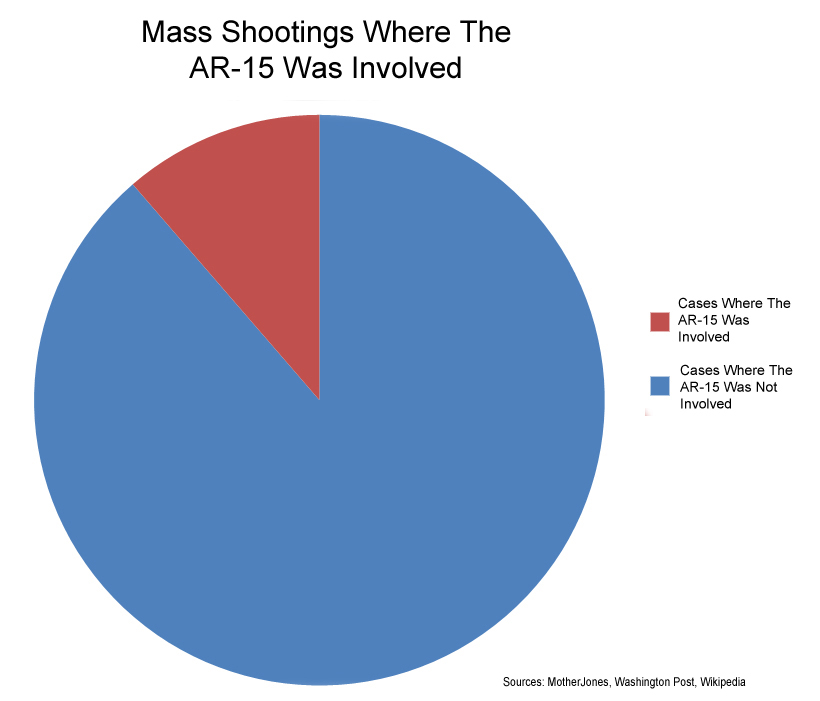 Now a problem with the statistics especially with those involving multiple weapons, there is no data segregating what weapon inflicted what wound in each person.  You may have a perpetrator using a semi-automatic pistol like a Glock and an AR-15 but the damage was done with the pistol only.  The raw statistics do not break that down at all or at least there is nothing readily available.

But at the end of the day, the statistics show that 272 handguns both semi-automatic and revolvers were involved in mass shootings compared to 54 for the AR-15.  Most handguns are easy to conceal and are easy to shoot with on-line retail prices ranging from $120 to $2,300 and up.

Sadly thou the number of mass shootings where the AR-15 has been involved in has been increasing. 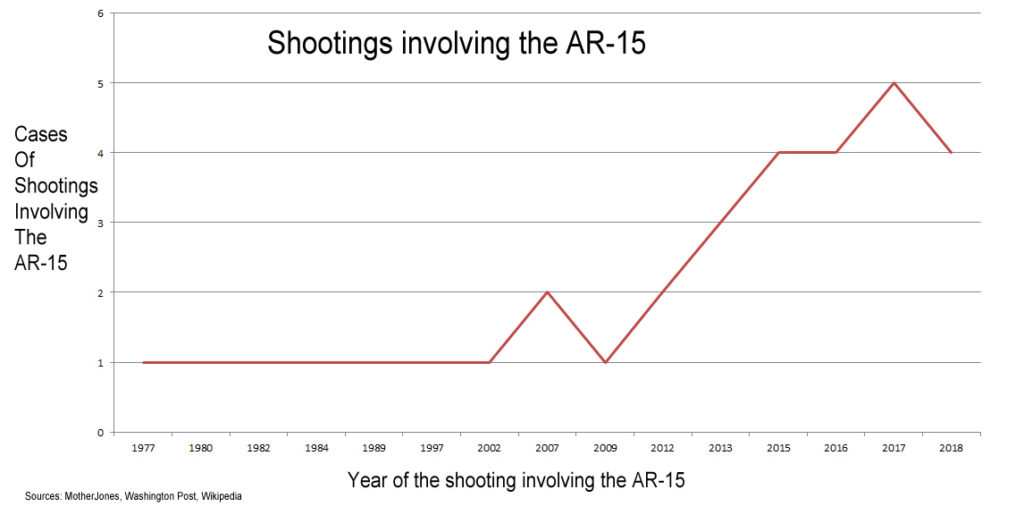 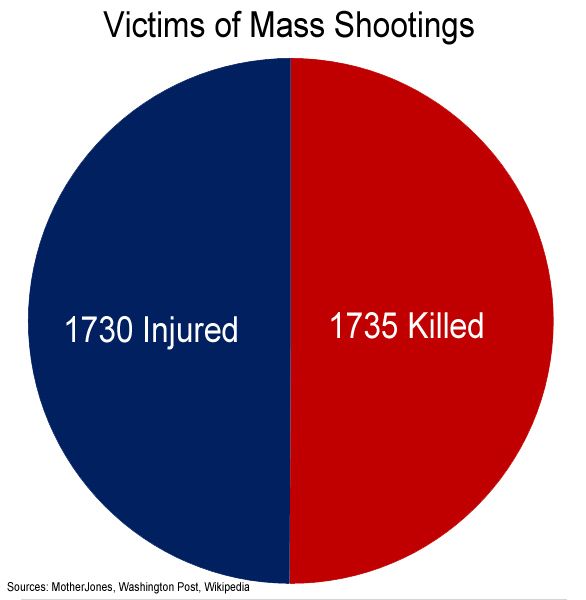 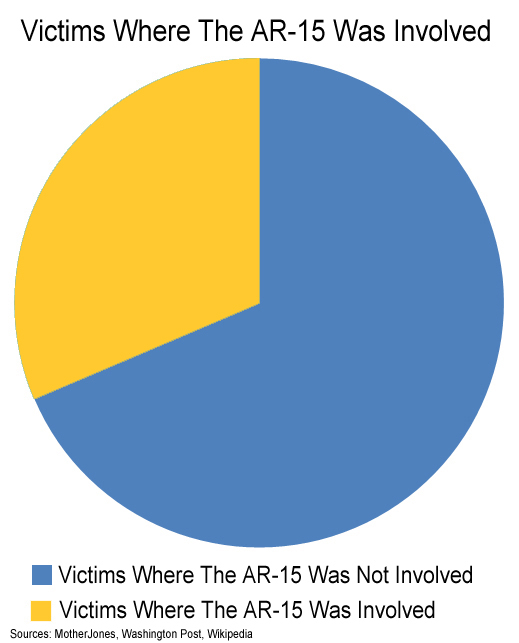 It should be pointed out that any shooting regardless if it is a mass shooting or not is a horrific tragedy and should not be down played regardless of what weapon was used.

Questions still remain
The big question remains, why the AR-15?  Is it because of the low recoil making it easier to fire off additional shots?  A .22 caliber has little to no recoil and can be very lethal and was the second most used caliber.  The 9mm was the first most used caliber.  Could it be the intimidating look of it?  It cannot be because of the size and weight for many other firearms run about the same weight and are the close to the same overall size within an inch or two.  It certainly cannot be due to the cost for there are firearms with more power for the same money.  Ease of shooting cannot be the answer for the AR-15 is as easy to fire as say the Ruger Mini-14 which uses the same bullet as the AR-15.

I think those are questions that will not be fully answered along with even a bigger question and that is why are we seeing an increase in mass shootings?

So the next question is, why is the media, politicians and anti-gun lobby so against the AR-15 when the bulk of mass shootings were done with handguns?

Jane’s Guns Recognition Guide, Ian Hogg & Terry Gander, HarperCollins Publisher, 2005, p.287 Sturmgewehr 44 “This is the father of all assault rifles, developed in Germany in 1941–42 an using a new short cartridge. Originally known as the MP 43 (Machine Pistol) for Nazi political reasons, it was renamed the “Sturmgewehr 44″ after its successful introduction into battle on the Eastern Front. It introduced the concept of using a short cartridge with limited range in order to permit controllable automatic fire and a compact weapon, and because experience showed that most rifle fire was conducted at ranges under 400 meters. After the war it was examined and dissected by almost every major gunmaking nation and led, in one way and another, to the present-day 5.56mm assault rifles.”

https://www.theatlantic.com/technology/archive/2016/06/a-brief-history-of-the-assault-rifle/489428/ The Atlantic. A Brief History of the Assault Rifle. The gun’s name may have been coined by Adolf Hitler. by MICHAEL SHURKIN. JUN 30, 2016